Ever since we bought the new Outback, the storage under the King bed wasn’t reasonably accessible. Meaning it took a substantial effort just to lift it up and it certainly would not lift up on its own, or even assist. It also was hanging up on the cheap plastic molding as it went up and down. Letting it down was similar to a guillotine and you just hoped nothing of yours was in the way. During our PDI walkthrough we pointed it out and was told it’d be taken care of. Well, at the end of our unnecessarily long day we didn’t double check the fact that they did nothing to fix it and the place had been closed for an hour already. We were spent.

For several months we dealt with not being able to use that area under the bed and added it to our rather lengthy warranty repair roster we prepared for Keystone’s service team. Thankfully while in the shop they fixed the issue with it hanging up on the molding, but they were not able to fix the struts – and they told me that Keystone denied any further repairs on it since it met specification.

Beyond frustrated and tired of large items that don’t belong in cabinets and cupboards I decided to resolve this once and for all. I purchased the Hatchlift struts after contacting the manufacturer and they suggested the strongest ones they offered, the “BLK-LGE” model for king beds. Thanks to Amazon’s 2-day Prime shipping I had them in my hand and was anxious to get started before the weekend. Let’s get to the build!

In case you didn’t know, the year before this model (2015) had a bed that mechanically raised the head up. Keystone called it the “Rest-n-Read” and most people complained about hitting their heads when it was up, as well as being really noisy. Most people didn’t care for it and some just disconnected it. My ’16 model doesn’t have that so here is the lower part of the bed that lifts up like most storage under the bed. The other side towards the headboard (if you can call it that) remains stationary and under it is the outside storage compartment. 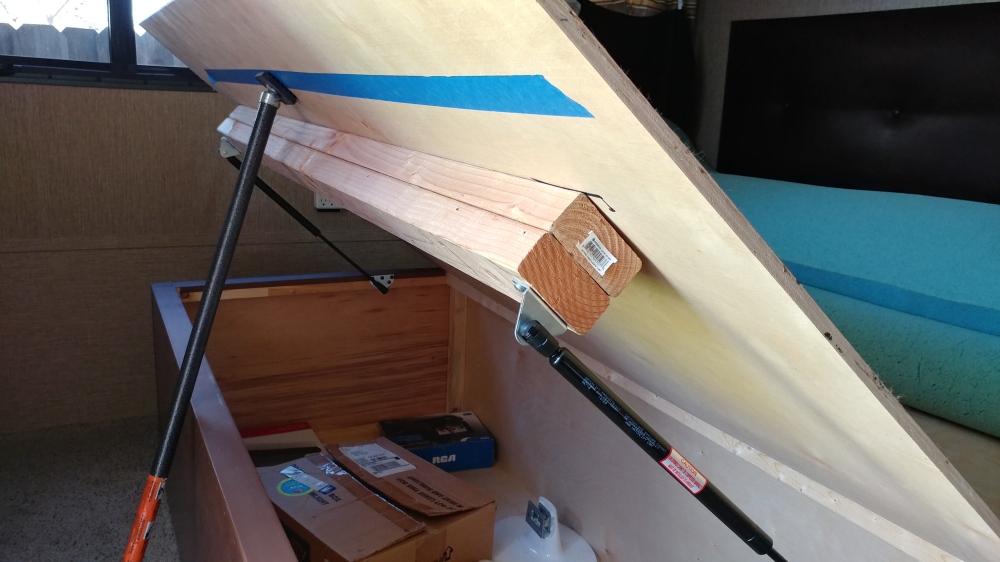 I don’t know what they were thinking at the factory, but those are two 2×4’s supporting a 1/2″ sheet of plywood. They’re very heavy by themselves but at least they left the bar-code on the ends… nice.

I was excited to put the new struts on knowing how easily they can be replaced, this should be a simple swap! Until…

I put the new struts on and slowly pushed down to feel the expected resistance. Sweet, this should work out nicely, it’s almost impossible to push it down now! Well that was until I lifted it back up to test again. As soon as I did, the whole left side shot out at me vertically and hit the inside of the storage area. When I tried lifting it up it was hanging up on the molding again. So… this is must be why it was a problem in the first place when I took it to the shop before. 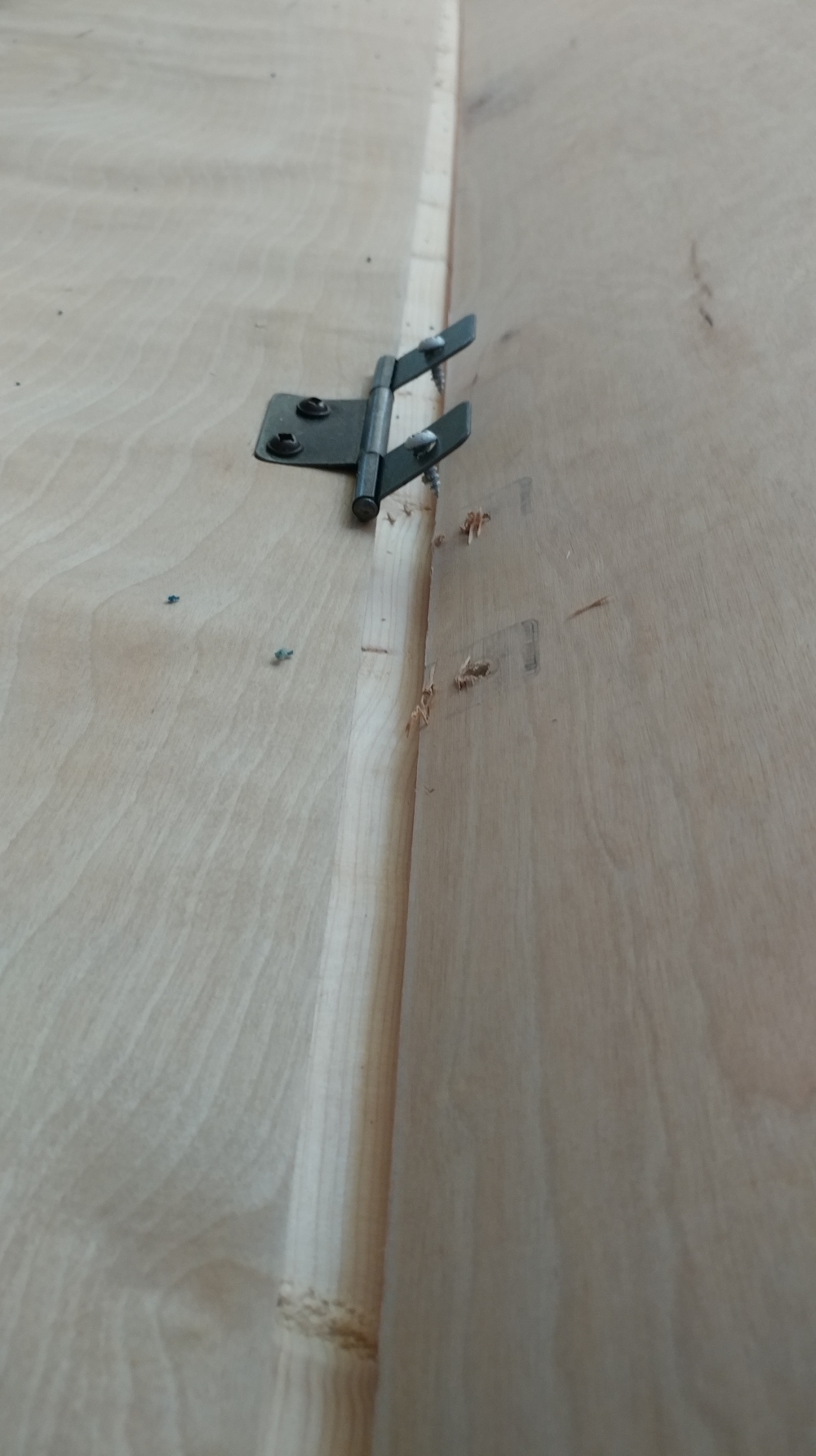 Basically the new struts overpowered the fasteners holding the only TWO hinges and ripping out the tiny screws thrust the whole bottom half out. I’d like to meet the people who decided that two small door hinges would be suitable to withstand the upward and outward force struts are inherently designed for in this configuration. Well, I’ve had about enough of this!

That’s right, it’s time to do this right and show Keystone how to build something that lasts! Luckily I had a 4′ long aluminum 1/4″ piano hinge that was slated for another build. I was saving this to build a ramp extension in the Toyhauler’s garage door, but alas, a functional bed is more important. I bought hinge from Amazon (Aluminum 5052 Continuous Hinge without Holes, Unfinished, 0.09″ Leaf Thickness, 4″ Open Width, 1/4″ Pin Diameter, 1″ Knuckle Length, 4′ Long)

I was getting started and the wife says, “hey, since you have this apart why not sand the edges so we can stop getting splinters?” That’s a great idea actually. On the left is stock, and the right is after. Again… Keystone, are you paying attention? This only took 5 minutes! 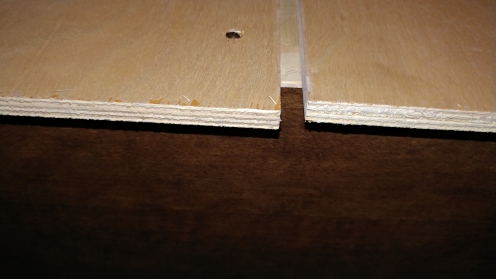 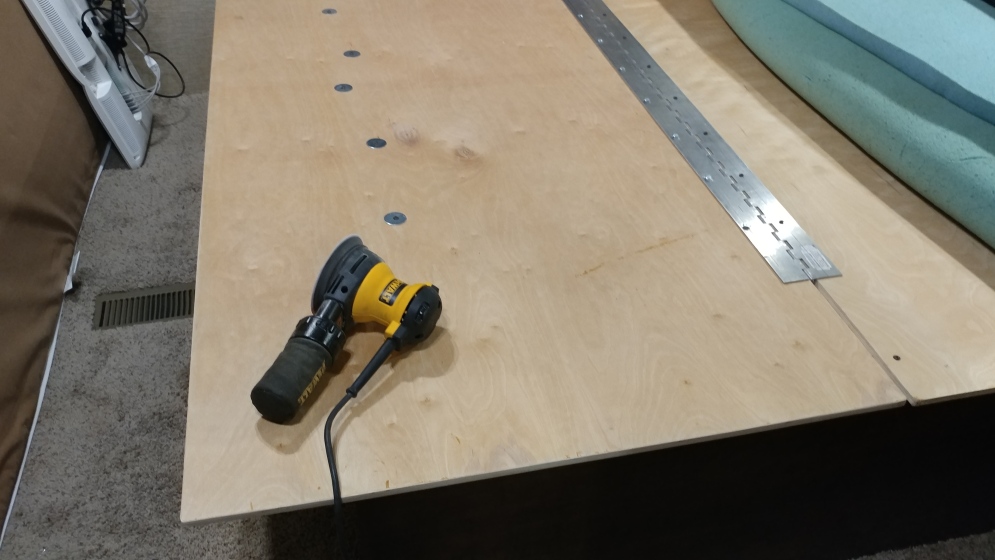 Okay back to the hinge.I decided to place the hinge down between the two panels so it wouldn’t rip up the mattress. It also makes it simple to make sure everything is square. This posed a problem however because the gap it created is where the top part of the bottom 1/2″ panel rested on as it butted up against the top panel. Now that I’m moving it down by a 1/4″ there’s only about 1/16″ left of the 2×4 under it supporting the bottom panel.

I found some sturdy scrap wood and secured it to the 2×4 which now extends the lip to support the top edge of the bottom panel better. This way our behinds won’t sink into the storage area and break the panel. The extra support isn’t the entire width, but since the panels overlap over the top of the storage box frame, that’ll support the edges sufficiently.

I’m standing at the foot of the bed taking this picture. On the bottom half of the hinge I have 7 1/4-20 hex bolts holding the bottom panel in. On the top part I have 4 (for now) 2-1/2″ wood screws. The top panel has a 2×4 under it so the screws have a very good bite.

The under side of the bottom panel. The ripping is the paper thin veneer, meh. As you can see the 1/4-20 bolts go all the way through and are secured with hex nuts.

The hinge is all done! I ended up putting a few more wood screws in so there’s now 7 of each type. I think it’s solid now! After I was done I duct taped over the fastener heads and edges of the metal hinge flaps so it doesn’t tear up the mattress.

Guess what… The new struts are NOT strong enough to lift the stock coil mattress and our 4″ Novafoam topper together. Oh well. I ended up re-adding the old struts and installing them in the middle. So now the old and new struts work together which is just enough to lift the whole thing, Woohoo!

The added wood block is included in the new kit. I predrilled before driving the 4 wood screws through, this was just to rough it in. Even though the wood blocks are against the 2×4, I still wanted to be sure this wouldn’t become a weak point. Also included in the kit are metal fasteners and self-locking nuts. I drilled 3 additional holes at each block and through-bolted the wood blocks and the panel together. 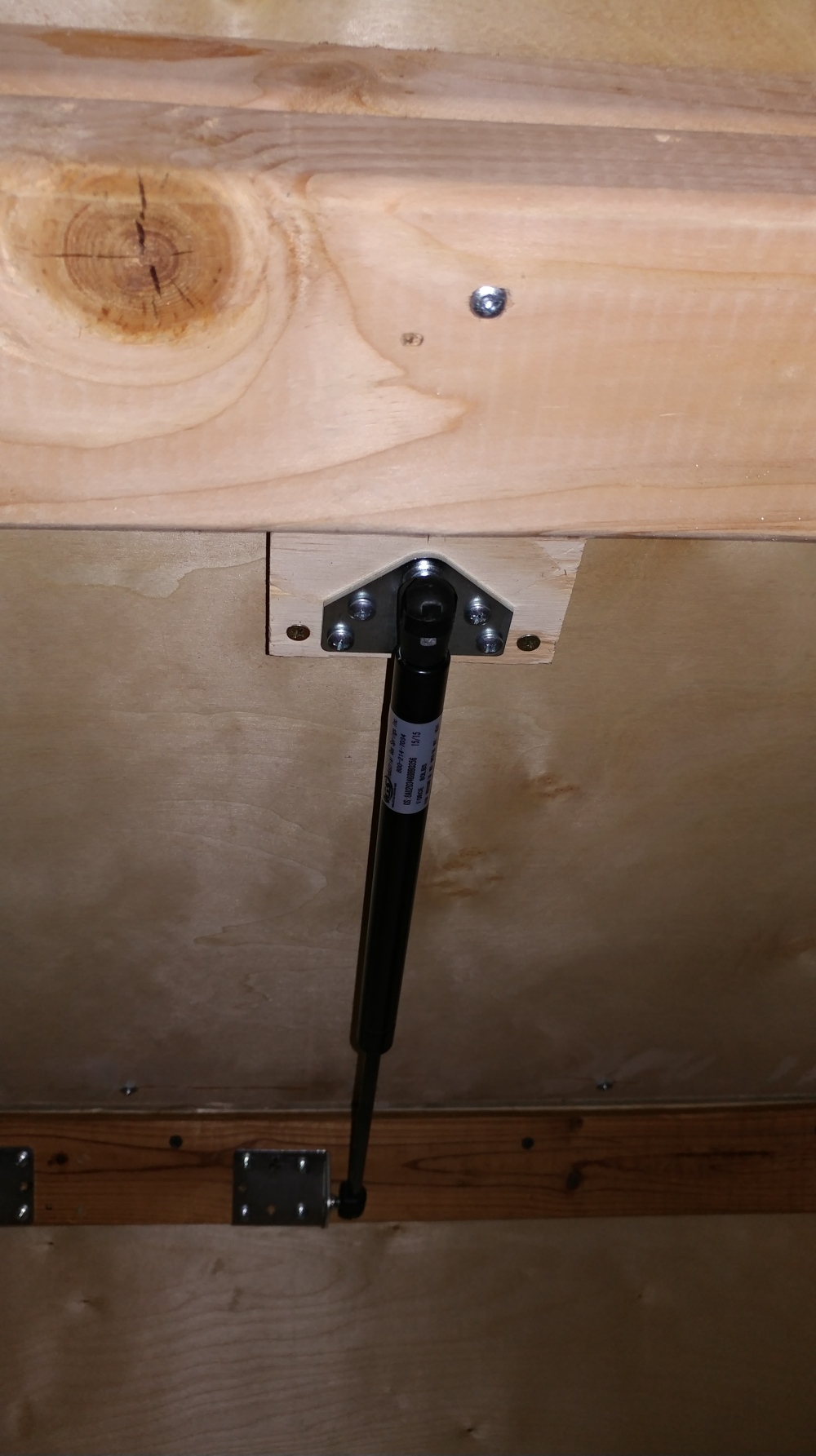 I noticed that the wood screws were protruding through the top of the panel where the mattress sits on top of and would tear up the mattress for sure. So I grabbed an 80-grit paper and used the orbital to grind them down smooth and flush with the panel’s surface.

If you look closely, you can see the longer fasteners on each wood block. They’re not going anywhere! The wife’s response… “Wow, that looks beefy!” Oh, yeaaaah. 😉